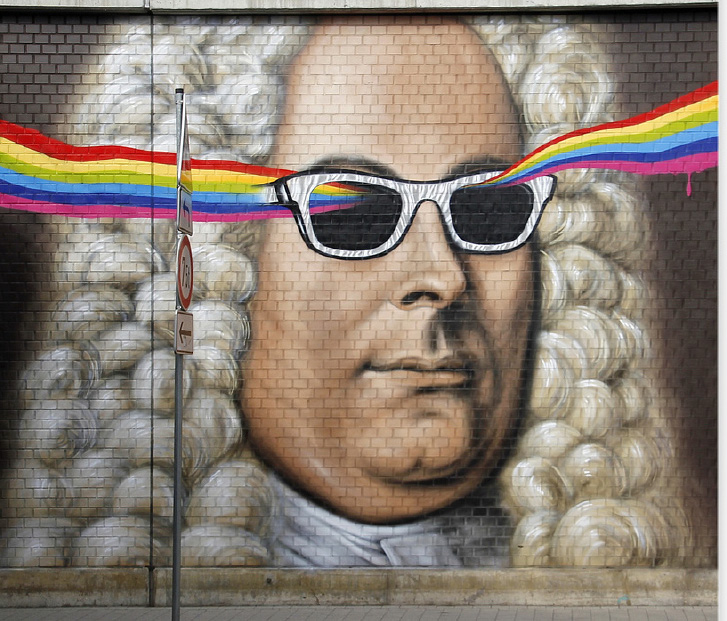 I felt very privileged to be invited by Clemens Birnbaum, Director of the Handel Festival in Halle, to speak at his press conference to launch the 2018 Festival there. Clemens attended the 2017 London Handel Festival and after a few meetings we were able to announce a regular collaboration, to include a lunchtime recital for prize-winners in the prestigious annual Handel Singing Competition and other partnership projects. This year in Halle there was an inaugural recital by Marcjanna Myrlak and Jungkwon Jang, the winners of the first prize and audience prize respectively in the 2017 Handel Singing Competition, as well as performances by Opera Settecento (Ormisda) and Adrian Butterfield, Associate Director of the London Handel Festival, with the London Handel Orchestra and soloists, including Grace Davidson and Charles Daniels (Chandos Anthem No. 8 and Te Deum).

Halle is in the region of Sachsen-Anhalt, which was formerly part of the GDR. The legacy of East Germany lives on in the rather austere grey buildings on the outskirts, but there is a charming historic centre, and trams which glide in and out of the city.  You cannot miss Handel in Halle, he is everywhere. The town has a population of around 200,000 and they are very proud of their musical son. My hotel was near the railway station, and on the way into the town centre, there were posters for the Halle Handel Festival everywhere and even a large graffiti mural of Handel in the main tunnel going underneath the railway bridge with Handel wearing sunglasses!  On the main square, there is a statue of Handel and also a pop-up display for the festival housing a loudspeaker with the ‘Hallelujah!’ chorus on a loop, so that everyone gets an energetic burst of music as they pass by. I also spotted on the pavements around Halle graffiti images of GFH with an arrow pointing towards the centre, and the text: ”Hier spielt die Musik” which I understand to mean: “here’s where it all happens”…never a truer word said. 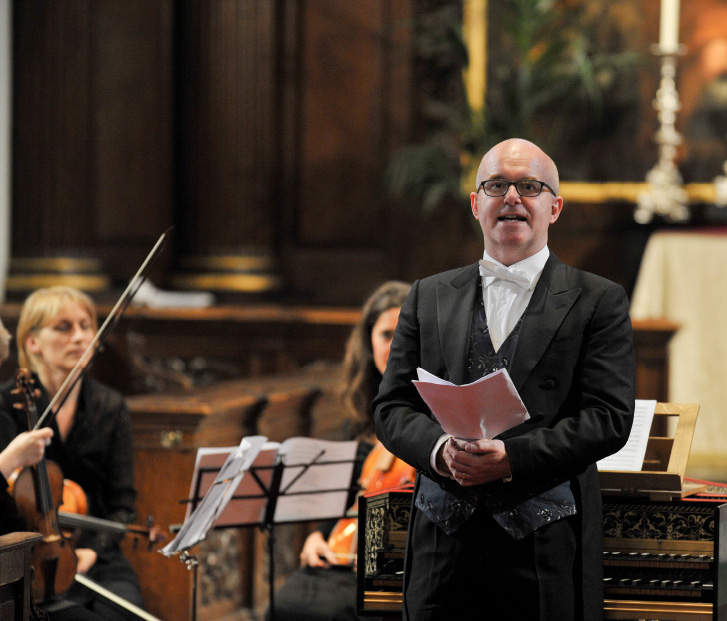 This was the day of the press conference, which was held in the chamber music room at Händel Haus – the museum in the house where Handel was born. There were around 20 journalists and other contacts, and I was interviewed (thankfully in English!) for the local radio station. I spoke about my excitement and pride to be in Halle representing London for the first time, in particular the forthcoming collaborative projects which would be part of the Halle Festival this year. At the conference itself, there were speeches from Clemens Birnbaum, Dr Bernd Wiegand (Mayor of Halle), Leo Duarte (Musical Director of Opera Settecento) and me. Handel was a proud European, who spoke five languages, and lived in different countries on the Continent before eventually making London his home. I spoke of how we were pleased to work together with Halle, in the spirit of musical friendship transcending borders, to honour our great composer, nurture the very best international talent, and keep Handel’s music alive for future generations.

After the press conference, Clemens very kindly gave me a personal tour of the house starting in the basement where there were remnants of wine bottles from when it had been used as a wine cellar. Then it was time for the Opening Ceremony on the main town square. Several hundred people were gathered around the statue of Handel in the bright late afternoon sun, and treated to an orchestra, brass ensemble and local boys’ choir in excerpts of Handel, Telemann and Bach. I was introduced to various local political contacts – the Halle Festival receives a lot of state funding, both from the city of Halle and the local region, and they all recognised the value of supporting culture, for economic and social cohesion reasons as much as artistic, with a particular focus on encouraging young people to participate actively in the music-making.  It was wonderful to witness the crowds assembled at Handel’s feet to enjoy his music, and the palpable sense of celebration and civic pride. All the while, the great man himself looked on, hand proudly placed on his waist in a stance of confidence with a steely determination on his face. The Mayor told me that he was facing towards London and his future, it was all very moving indeed.

That evening, we went to see the Festival’s production of Berenice at the opera house with fine playing by the Händelfestspielorchester Halle under the direction of Jörg Halubek. The production by Jochen Biganzoli was modern and quite daring, with frequent digs at our contemporary obsession with self-image and hopeless narcissism, with the characters literally falling over each other to take selfies, and addressing the B-section of their arias directly to a live camera which then relayed it to big screens across the stage. I found it all insightful and witty, but it did not please the traditionalists at all. Of all the singers, I was most struck by the young Venezuelan male soprano Samuel Mariño playing the part of Alessandro – both his voice and stage presence were utterly natural and showed great promise. 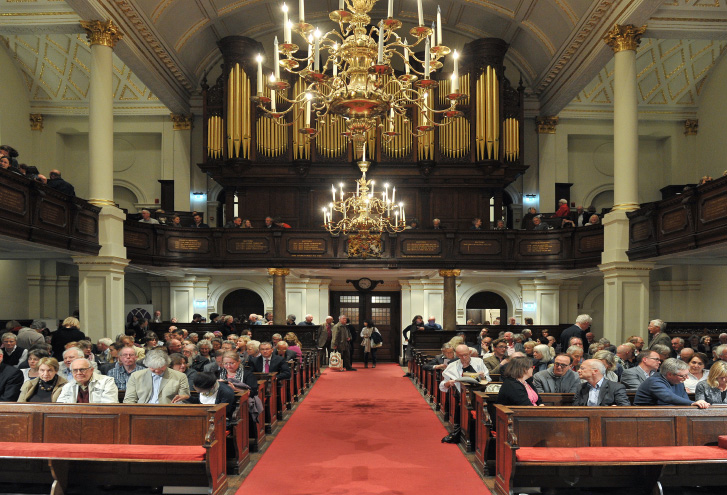 I spent the morning looking around the Marktkirche, the spacious Renaissance church facing the main square where Martin Luther preached, and where Handel was baptised and had his first organ lessons. Then I headed to that afternoon’s performance of Handel’s pasticcio Ormisda by Opera Settecento, which had been performed at the 2017 London Handel Festival. The concert was held in the historic Franckesche Stiftungen, a former orphanage which Handel knew and which perhaps gave him the inspiration to get involved with the Foundling Hospital in later life. Under the stylish direction of Leo Duarte, the group received a well-deserved standing ovation. I was particularly impressed by the performances given by Hugo Hymas (Ormisda), Marie Lys (Artenice) and Maria Ostroukhova (Arsace), the latter two recent past finalists from the Handel Singing Competition.  The day was rounded off with renowned diva Joyce DiDonato in her programme entitled: “In War & Peace – Harmony Through Music” which featured several well-loved Handel arias including ‘Dopo notte’ and ‘Lascia, ch’io pianga’ alongside music by Purcell, Gesualdo and Pärt. Ms DiDonato, whom I had the pleasure to meet afterwards, was accompanied by the energetic and supremely talented Italian group Il Pomo d’Oro and her singing was enlivened by a single male dancer whose movement underlined the essential pathos of the music. Not surprisingly the audience were on their feet at the end. 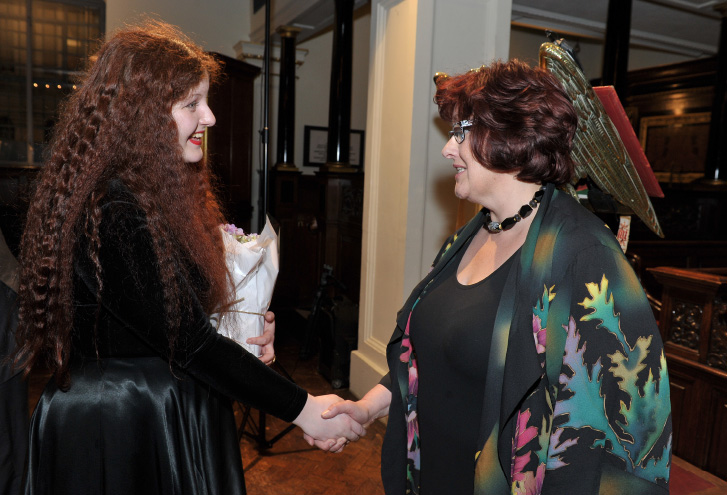 Another recital in (yet) another beautiful space in the morning, this time the German group Capella Augustina with Belgian soprano Sophie Karthäuser in the impressive great hall of the Martin Luther university. Ms Karthäuser quickly won the audience over with her clear commitment and flawless technique, demonstrating a range of emotions and impressive collatura. Her arias ranged from favourites ‘Piangerò’ and ‘Verdi piante’ to the lesser-known ‘Combatutta da due venti’ from Faramondo.

I had been so spoiled with all this glorious music in the most elegant surroundings, interspersed with the most delightful conversations with Handel-lovers from all over the world. With a heavy heart, I made my way to the Ulrichkirche for the final concert of my sojourn – Samson with the Dunedin Consort. I have superb recordings of this excellent British group but have never heard them live and was not disappointed. Joshua Ellicott cut a fine figure as Samson, Sophie Bevan dazzled as Dalila and Matthew Brook’s Manoah was well judged. The orchestra were impressive under John Butt.

Sadly I missed the two other concerts which featured artists from the London Handel Festival – the Chandos Anthems concert in the Dom with Adrian Butterfield, distinguished soloists and members of the London Handel Orchestra, and prize-winners from our 2017 Handel Singing Competition accompanied by Asako Ogawa in the intimate chamber music space of Händel Haus. I understand that both concerts were excellent and well received by enthusiastic audiences.

My overall impression of Halle was of a thriving festival with extremely high musical standards and a loyal community of regular attenders, allied to political will and funding to make it all happen. I have been inspired to try and achieve even better recognition for Handel here in London, he certainly deserves to be better known beyond the committed but relatively small group of aficionados. My congratulations and thanks to Clemens on a wonderful year and for inviting me – I cannot wait for my next visit!