In 1784, twenty five years after Handel’s death, a series of memorial concerts were mounted in Westminster Abbey.  Involving unusually large forces for the period, in excess of 500 performers, the event was organised by John Montagu, Earl of Sandwich.  The commemoration established a fashion for large scale performances of Handel’s works which saw its culmination in the huge Crystal Palace concerts. 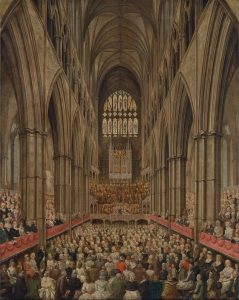 In June 1859, after a couple of less than satisfactory attempts in the preceding years, massed forces under the conductor, Michael Costa, gave a huge scale concert in the Crystal Palace.  The forces, which would have made even Mahler blench, consisted of chorus of 725 soprani, 719 altos, 659 tenori and 662 bassi: an eye-watering total chorus of 2765 singers.  In addition the orchestra of 92 first violins, 90 second violins, 60 violas, 60 cellos, 61 double-basses, 10 flutes, 10 oboes, 10 clarinets, 10 bassoons, 6 trumpets, 12 horns, 9 trombones, 3 ophicleides, 2 bombardons, 8 serpents, 3 double drums, 4 kettle drums, 1 bass drum, 6 side drums and, just in case, a full size organ.  The grand total of performers thus numbered 3,222 and probably more closely resembled a work by Berlioz than Handel! 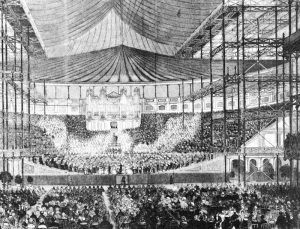 The tradition of monster festivals of Handel’s music at the Crystal Palace continued well into the 20th century with Sir Henry Wood conducting the final one in June 1926.  On that occasion Wood’s forces comprised an orchestra of 500 and a chorus of 3500 plus soloists.  This mammoth occasion was the final one held at the Crystal Palace which tragically burn down in 1936.  However the custom of outsize performances of Handel’s oratorios, Messiah in particular, continues up to the present day. 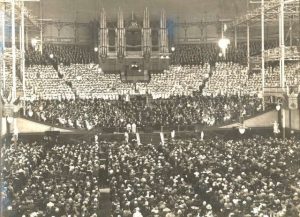