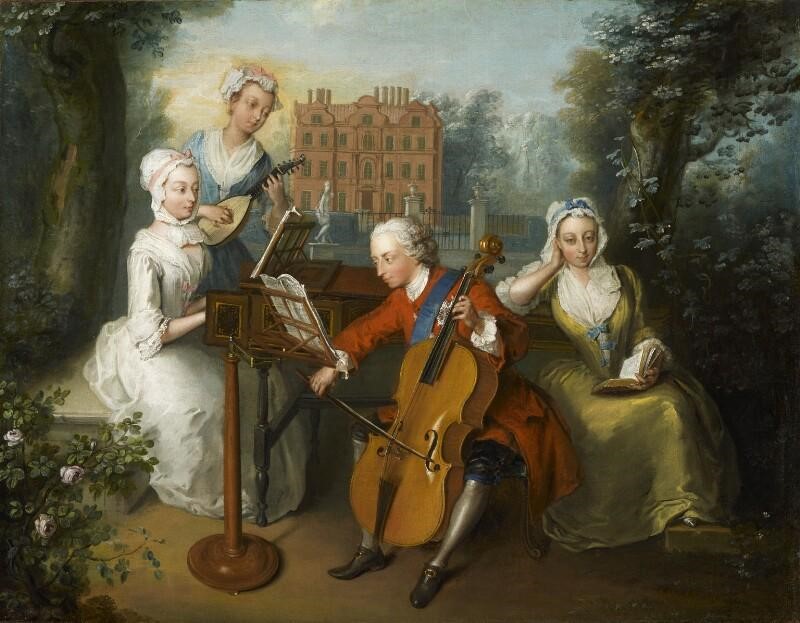 There are several versions of the famous The Music Party, but the one shown, by Philip Mercier, hangs in the National Portrait Gallery.  It shows four members of the British/Hanoverian royal family engaged in music and literature. From left to right they are Anne, Princess Royal at the harpsichord; Princess Caroline on the Mandora (the lute-like instrument); Frederick Lewis, Prince of Wales on the cello and Princess Amelia reading Milton.  A recreation of this painting in concert form took place in the 2020 London Handel Festival, and in fact was the last event in the Festival before lockdown was announced in the UK because of the Covid-19 pandemic.  Two thirds of the events in the planned Festival were cancelled.

Mercier, also known as Philippe Mercier, was of French Huguenot extraction, though born in Berlin.  He studied there before travelling in France and Italy to further his education and finally arrived in London around 1716 with a recommendation from the Court of Hanover.  He was appointed principal painter and librarian to the Prince of Wales’ court in Leicester Fields and produced various group portraits of the family. One of these, Playing Soldiers, showed the Prince’s three elder children and a (uncredited) dog in a playful military allegory. 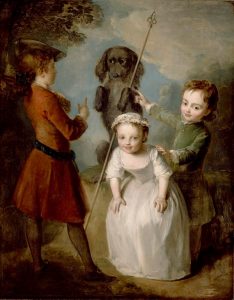 Mercier painted The Music Party in 1733.  He was later to fall out of favour when he was embroiled in a scandal and left London to live in York in 1740.  He returned to London in 1751 but never regained his former fame and position.  He died in 1760.  His daughter, Charlotte, had some brief success as an artist before “turning to a life of dissolution” and dying in the workhouse some mere two years after her father’s death. 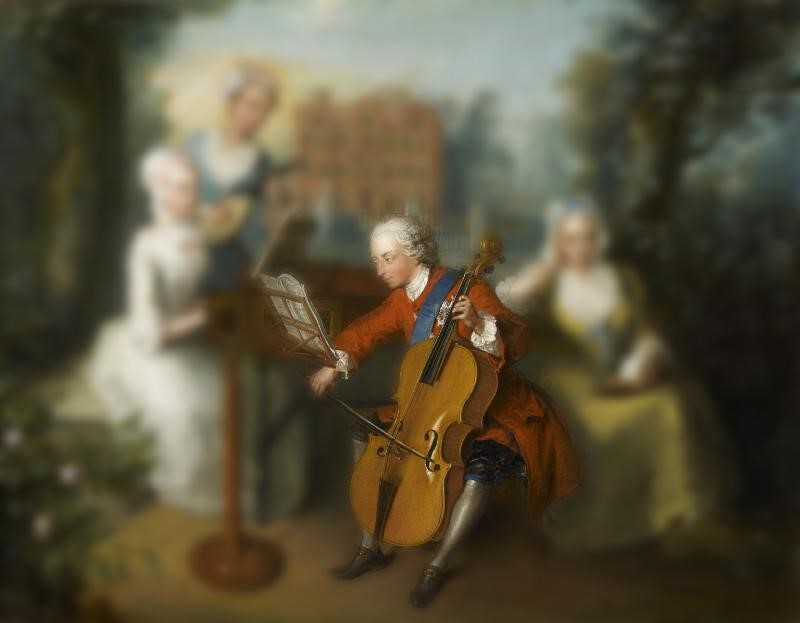 Frederick Lewis, Prince of Wales, was eldest son of George II.  However he spent much of his early life apart from his father in Hanover under the care of his grand uncle, the Prince-Bishop of Osnabrück.  When he finally joined his father in England their relationship was already damaged but Frederick further exacerbated the ill feeling by openly sponsoring a “court” of opposition politicians and supporting the Opera of the Nobility in direct competition with Handel’s royally sponsored opera company at the King’s Theatre in Drury Lane.

Although Frederick was a keen patron of the arts his writing talents were of a less than stellar nature – under the pseudonym Captain Bodkin he wrote a theatrical comedy which was staged at Drury Lane.  So dreadful was the play that it barely lasted one performance and the manager was forced to refund the entire audience.

Although a change of government led to a reconciliation between Frederick and his father he was not destined to succeed to the throne.  He died aged only 44 – his death was originally attributed to an abscess caused by a blow from a cricket ball. Alas, the truth was somewhat less colourful – his death is now thought to be due to a pulmonary embolism. The final word must go to an anonymous wit: 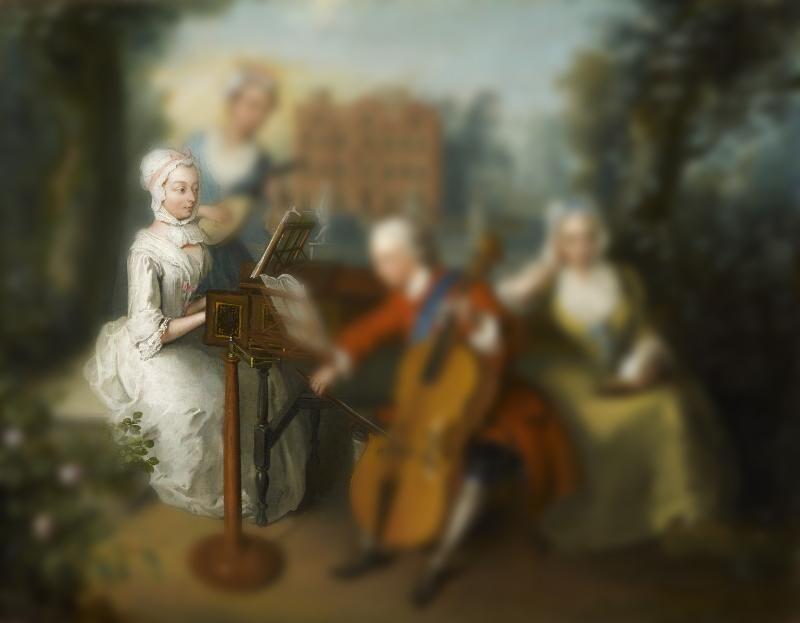 Anne, Princess Royal and Princess of Orange, was born in Herrenhausen Palace, Hanover and named after Queen Anne.  She was well versed in German, French and English.  She was one of the few pupils of Handel, who famously disliked teaching but was prepared to make an exception for “Anne, flower of princesses”.  She rewarded him with lifelong support, attending his operas and subscribing to his music.

In 1720 Anne contracted smallpox – she survived but was facially scarred.  Her mother, Caroline of Ansbach, was to help popularise the practice of variolation (an early type of immunisation) and both Anne’s younger sisters were inoculated successfully.

When Anne married William IV, Prince of Orange, Handel was contracted to provide music for the service.  The Wedding Anthem This is the day was set Anne’s own words adapted from Psalms 45 and 118.  He also composed an operatic entertainment, Parnasso in Festa which was given with much success at the King’s Theatre in March 1734.  Much of the music in Parnasso was recycled from the oratorio Athalia.

William died in 1751 and Anne was appointed Regent, a post which she held till her death from dropsy nine years later. 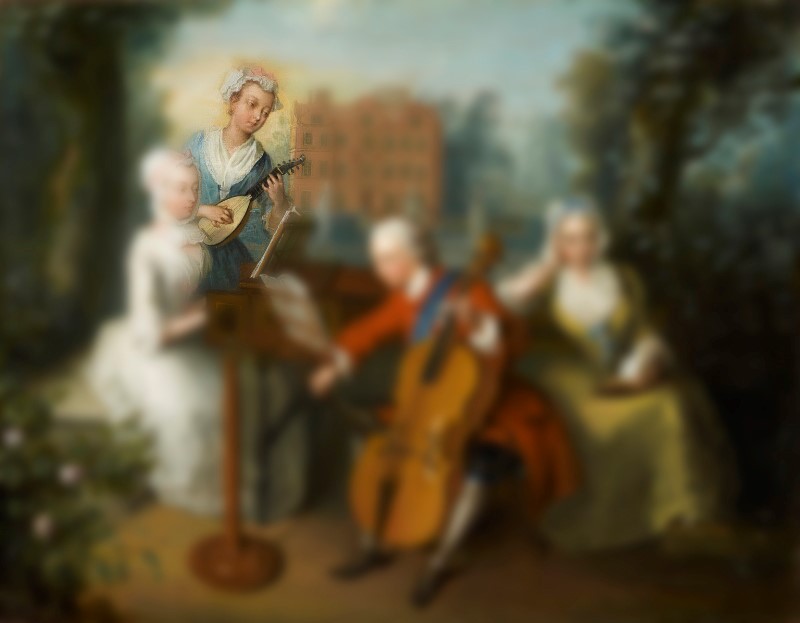 Princess Caroline Elizabeth of Hanover was born in Herrenhausen Palace on 10th June 1713.  However in 1714 her grandfather became George I of England and the baby Caroline accompanied her mother and elder sisters to London. Once the Hanover dynasty was established in Britain, Caroline became a Princess of Great Britain.

Caroline was her mother’s favourite and was known as the “truth-loving”. Whenever an argument in the family needed to be settled the cry was always “Send for Caroline and we shall know the truth!”  Although she is pictured playing the mandora in The Music Party, music does not seem to have played a central part in her life.

According to commentators of the time she was perceived to be “fair, good, accomplished and unhappy”.  Caroline’s unhappiness may well have stemmed from an unwise passion for Lord John Hervey.  Hervey, who was rumoured to be bi-sexual, had affairs with numerous ladies of the court but remained resolutely married to Mary Lepell, by whom he had sired 8 children.  When Hervey died in 1743, Caroline became a virtual recluse in St James’ Palace for the last 14 years of her life. She died aged only 44 and is buried in Westminster Abbey. 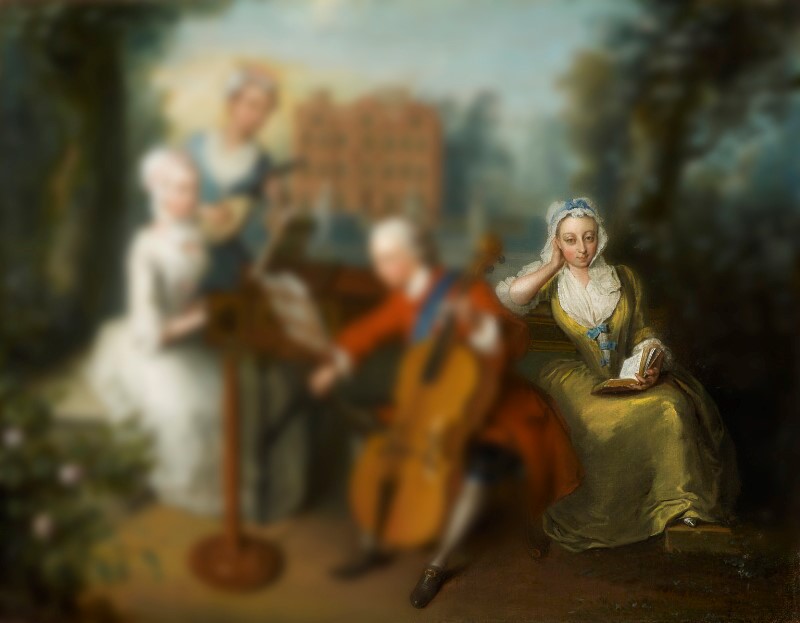 Princess Amelia of Great Britain is the fourth royal pictured in The Music Party and the only one not engaged in playing an instrument. The book she holds is believed to be a volume of Milton’s poetry.

Like her siblings, Amelia was born in born in Herrenhausen Palace but moved with her family to England in 1714.  She was a sickly child and her mother employed various physicians including Johann Georg Steigerthal and Hans Sloane to attend the Princess.  She also consulted John Freind covertly – Freind was a controversial figure who, in 1722, was to spend six months imprisoned in the Tower because of his suspected links with the exiled Stuarts.

It had been hoped that Amelia would be married to Frederick, the son of the King of Prussia (later Frederick the Great).  However the match was overruled by Frederick’s father.  Amelia never married and, when she died, a miniature of Frederick was discovered in her possession.

Amelia seems to have been more interested in riding and hunting than the fine arts though there is a possible scandalous connection to classical music as she may have been the mother of composer Samuel Arnold through an affair with Thomas Arnold.  Although little of Arnold’s music survives today, he was responsible for producing the first edition of the collected works of Handel between 1787 and 1797, published in an easily digestible 180 parts.

Amelia was generous in her charitable donations and gave financial aid to help educate the orphans of clergymen and was an annual subscriber to the new County Infirmary in Northampton.  The bath house and folly that she built in Gunnersbury Park is now an English Heritage museum.

Unlike her siblings, Amelia lived to the ripe old age of seventy five and is buried in Westminster Abbey.