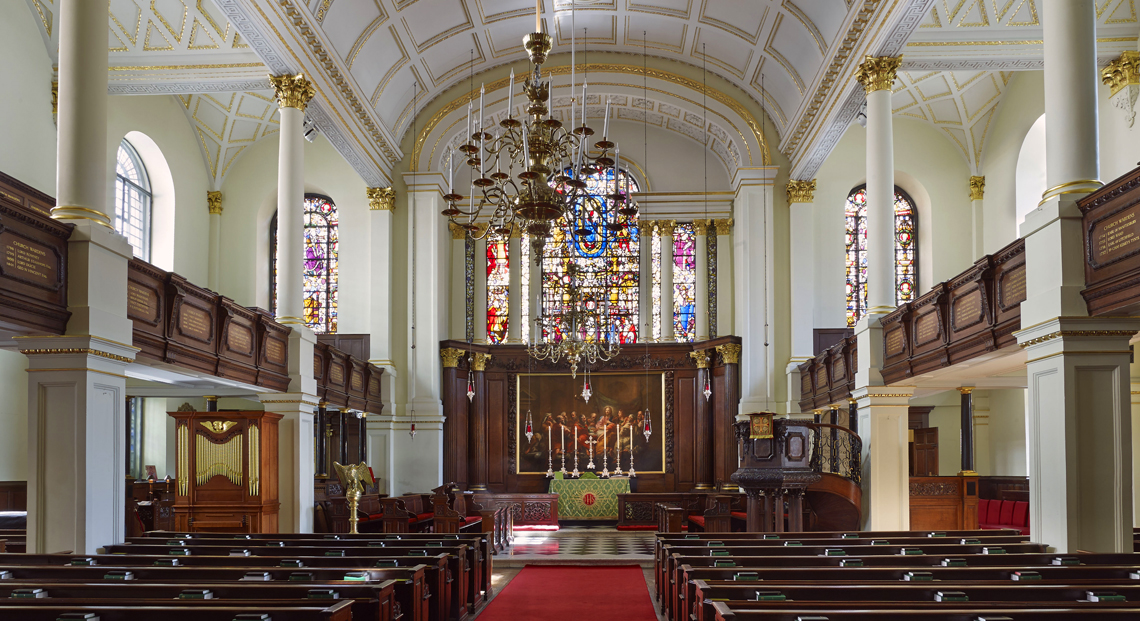 During two and a half centuries St George’s has been a centre of musical activities from the time of Thomas Roseingrave, appointed the church’s first organist in 1725, to our own day and the present musical director, Simon Williams. In 1978 the then organist, Denys Darlow, founded the London Handel Festival. The church was built when Handel was in his thirties. In 1723 he rented a house nearby in Brook Street and remained there until his death in 1759. He was often to be seen in the church, especially in his later years, and this makes St George’s a particularly appropriate venue for the London Handel Festival.

The past nine years have seen an extraordinary period of restoration and renewal at St George’s. In 2010 comprehensive repair and refurbishment of the interior of the church took place and in 2012 a brand new organ was installed. The process of planning, crafting, and then installing a first class organ (by Richards, Fowkes & Company of Tennessee) took a full four years and after its dedication to the glory of God and a superb inaugural recital in October 2012, those now coming to the church as worshippers or concert-goers are able to hear the results of these labours for themselves. In January 2013 St George’s and its sister church, the Grosvenor Chapel, launched a combined weekly lunchtime recital series known as Mayfair Organ Concerts. Both churches are delighted that the 2019 London Handel Festival will once more incorporate recitals in this series into its own programme.

But the work of St George’s is not all musical! As an enduring presence at the heart of the Mayfair community, St George’s tries to be responsive not only to the needs of those that live or work in the area, but also to those who simply pass by. Seven years ago, in partnership with the Cabman’s Shelter on the northern side of Hanover Square, the church embarked on a feeding programme for the homeless in our midst. As a result homeless people no longer just pass by but come into the church along with worshippers, cultural tourists, concert givers and attenders, and those who simply come in for a moment’s quiet reflection in their busy lives.

Next year this mix of people coming to St George’s will change still further, as those emerging from the new Crossrail station in Hanover Square and heading south walk down St George Street. It is with this growing, complex and everchanging social melange in mind that St George’s has taken the bold decision to open up its Undercroft. This attractive vaulted space beneath the church, with a floor area greater than that of the church itself, has historically been used for storage. The ambitious and exciting plan is to turn an unloved and under-utilised space into a vibrant, accessible, multipurpose venue. This will be a mammoth endeavour and will shape how St George’s is used in future generations. The church’s vision is driven by three aims: to generate sufficient funds to support its own and others’ work with the homeless; to improve its accessibility to everyone; and to expand the range of its activities. Work on converting the space and providing access to it from the church and street began in August 2017 and will be concluded this summer.

Getting to St George’s